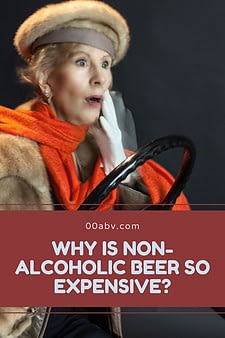 Why Is Non-Alcoholic Beer so expensive?

The thing is, it’s still beer, and the size of the market and technology could make it more expensive, not less.

But why Is Non-Alcoholic Beer so expensive?

If you add in marketing and branding, the costs stack up, but I can see why people think it would be cheaper with no alcohol.

After all, for many consumers, these are newly marketed products haunted by the bad-tasting beer zero failures of yesteryear.

And I get that I do.

But let’s keep it accurate.

The cost of non-alcoholic lager and beer is an issue

A common grievance concerning non-alcoholic, alcohol-free and low-alcohol beer is that it’s all too expensive

The reason comes down to perceived low quality and the expectation that it should be cheaper.

I know I’m like you, having been in the bar only to discover my Heineken Zero in a bottle cost more than my partner’s pint of the average alcoholic beer.

Most people get shocked when you dig deeper, but when they order their first non-alcoholic beer brand, the price does not reflect the fact it has little or no alcohol in it.

Most of us expect the cost of it to be comparable with various other non-alcoholic beverages like soda pop, lemonade or even soda water.

The trouble is, it’s not the alcohol that makes alcoholic beer costlier than non-alcoholic drinks.

If you go alcohol-free to save money on your purchase, you might be in for a wake-up call! But, of course, you can save money in many other ways and help your health.

But no one thinks of this at the time of purchase.

Sure, there’s alcohol responsibility. Yet this only comprises a small per cent of the price of beer in the UK, where we pay a few of the highest possible prices of alcohol duty on the planet.

For example, the beer obligation on a 5% ABV beer pint is about 54p (less for the smaller breweries that obtain responsibility alleviation).

Whatever you may make for the beer, the margins this makes in terms of profit are roughly the same.

After all, it is beer, just not alcohol.

Plus, the market is still so young you could argue the marketing cost and return on investment are very tight.

So it’s still beer with the extra effort. 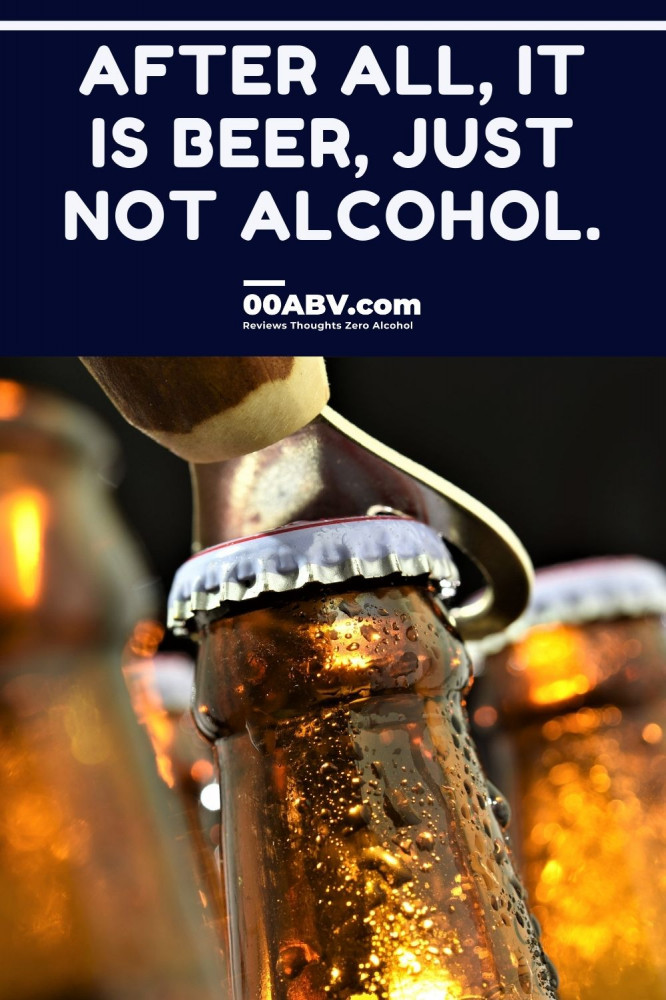 The lack of alcohol doesn’t make it a substandard product to alcoholic beer.

For instance, several alcohol-free beers are made by getting rid of the alcohol after fermentation.

This implies the beer undergoes the same brewing process as routine beer, with the included expense and effort of getting rid of the drink while preserving the preference.

Other alcohol-free beers use special yeasts that generate much less alcohol or a mix of premium active ingredients that enable the maker to resemble the aromas, preference, and mouthfeel of regular-strength beer without alcohol.

Unfortunately, these active ingredients do not come inexpensively.

So we are paying for a premium product in many respects, but we are like “no alcohol” in our head, so that is fine.

It has to be cheaper.

And we keep repeating that mantra, but of course, it does not get any cheaper.

Why are non-alcoholic beers generally in bottles?

The reason is, of course, the cross-contamination of the beer.

I mean, checking the abv so alcohol by volume via the pump system is hardly realistic, is it? 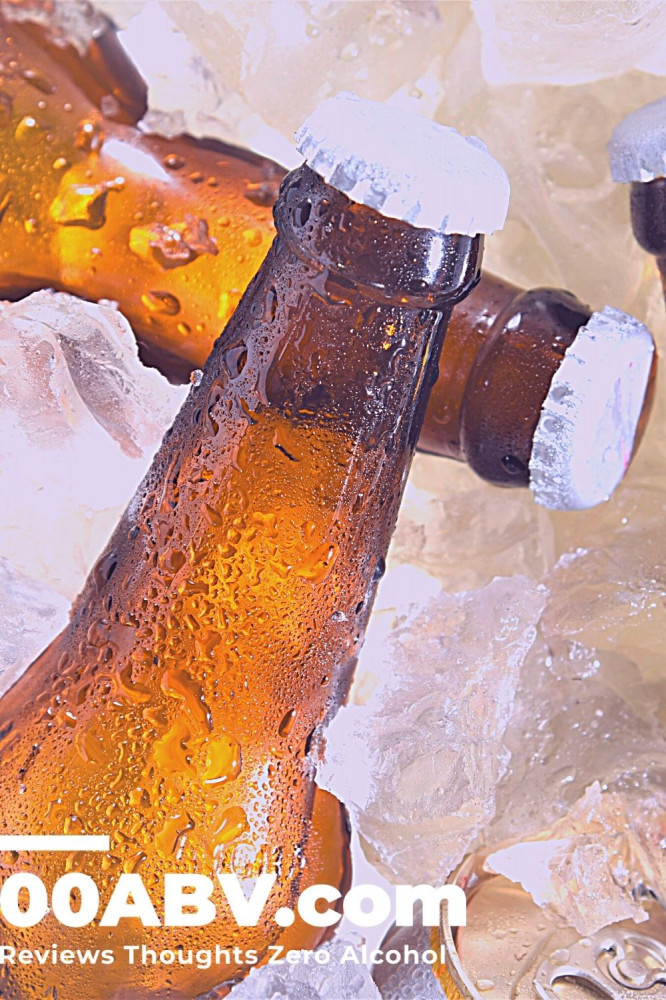 For the record, I only drink alcohol by a volume of 0.0% because of my health. Some beer may have a trace like orange juice but do I want my alcohol and no alcohol mixing in the pumps.

No is the answer, so what’s the issue?

It all amounts to temperature.

And I have to thank my podcast host Ian for this interesting fact.

Of course, alcohol does not freeze, whereas alcohol-free does. So imagine a beer pump with frozen non-alcoholic beer pumping through.

Crikey that would not work, would it?.

Although some countries where the demand is more considerable, like in Spain, you do see it.

I have often seen non-alcoholic beer on draft being served alongside tapas. They use a separate system.

Spain was an early adopter of non-alcoholic beer, which means there is a bigger pie to pull from.

It may only be a 5 per cent difference in penetration within the market, but that in itself means you will have very different margins.

Plus, branding for me personally is essential. The colour and the prominent 0.0% logos will all take extra investment.

Not to mention the focus group and the technology of the brewing.

The return on investment is tight.

Naturally, more significant manufacturers that can mass-produce beer and escape lower profit margins can charge a lot less for their alcohol-free offerings.

We could also see some breweries losing any profits from their non-alcoholic beers to obtain a foothold on the growing alcohol-free market.

Yet, this isn’t an alternative for smaller sized breweries.

They’re unable to gain from the economies of scale that big breweries take pleasure in.

They likewise do not obtain the tax obligation breaks that enable little breweries that create an alcoholic beer to compete with bigger breweries.

Eventually, breweries large and also little need to make reasonable earnings to operate as a practical organization. If they do not, they’ll quit making alcohol-free beer or, worse, go under.

When people moan about their local corner shop closing, they never went in there when you dig deeper.

If you want it, you have to support it.

Always check if you are supporting the thing you will hate if it goes—simple, right?

Nevertheless, if you intend to drink great-tasting alcohol-free options like alcoholic beer, you’ve reached out to pay a fair price.

Or else, we’ll be entrusted with less opportunity and much fewer competitors, pushing down the top quality of the non-alcoholic beers that do make it through.

I mean, let’s face it, the choice is almost zero in bars now; imagine cutting in half that and then cutting it back again the following year.

That’s not great if you are even cutting back, let alone giving up alcohol altogether.

Have you been surprised at the cost of non-alcoholic beer?

So you started an alcohol-free journey, and of course, you expected the beer without alcohol to be a lot cheaper.

So let us support the industry, but I get the shock when you first hear of a beer in a nicely branded bottle without alcohol.

I have been there, and I know the feeling.

Is it morally right that you pay more than someone drinking full strength like alcohol-based beer?

Of course, we will spend less as you do if you have not had a drink, right?

Of course, the alternative is no industry at all.

Have you been surprised by the cost of non-alcoholic beer? I would love to hear your views, so get in touch; leave your comment below.

Hopefully, I have help with the question, why is non-alcoholic beer so expensive?