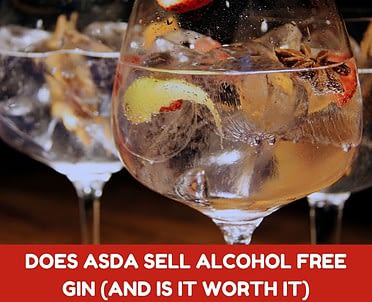 Does Asda sell Alcohol-Free Gin (and is it worth it)

Asda does sell alcohol-free Gin, although we cannot call it that for legal reasons and its lack of Alcohol.

If Asda does not mean anything, think of Walmart or a big superstore.

Although everyone calls it that.

I mean, I get the whole alcohol-free spirit thing but let’s be honest for a second.

It seems even the biggest supermarket chain wants to get in on the act. But can they beat the Gordon’s and Seedlips of the World?

What is Asda’s Alcohol-Free Gin?

First and foremost, it ain’t Gin, and there is a good reason for that as Gin needs a high alcohol content.

That is why it is called an alcohol-free spirit.

We should not call it that either, as spirit implies, Alcohol. I know it is complicated, right?

The fact is if you don’t call it Gin and Alcohol-free, then no one has a clue what you are going on about.

But Asda and the big supermarket brand are getting in there. And yes, it is a good thing as the choice is bad enough as it is.

But you will only drink it if it tastes nice, right?

The Gin History is as old as a sailor.

Gin has a history, and in reality, it goes back a long way.

OK, scrub that as they still use Alcohol in the hospital now but not the same way.

If you are alcohol-free, I bet that is a relief.

It’s hard to imagine any drink being as synonymous with commercialism as is Gin.

Check out your alcohol limit via drink aware.

Nevertheless, there is always more than one side to every story.

I blame the Gin loving Dutch. 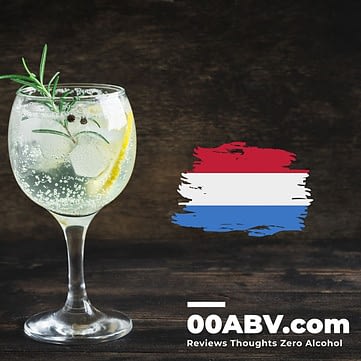 Gin is a drink created by the Dutch in the 17th century, initially as a medicine.

Got the flu? No sweat; shove that down your throat.

It became popular throughout the 18th and 19th centuries, and for a period in the mid-20th century, after Prohibition was repealed, Gin was the most popular spirit in the US.

But because production was so labour-intensive.

However, it remained popular as a mixer, and that’s probably where its popularity started coming back.

It is when the mixer became kind of cool.

Gin tends to be flavoured with juniper berries, coriander seeds, angelica root, or hyssop. (The juniper berry gives it a flavour reminiscent of pine needles.)

Some of the flavourings, such as angelica root, aren’t necessary, but they add flavour.

Different types of Gin are produced from other types of grain.

For example, London dry gin is dry, while Plymouth gin is sweeter, and martini gin is somewhere between.

How does Asda’s Alcohol-Free Gin taste

Overall well done, Asda, for trying. I applaud you. I really do, but it does miss the mark in a few areas, mainly smell and taste.

But you might have priced it too high, and they now seem to have rectified this.

Disappointed with this – smells peculiar and tastes just as bad. One customer said to me while I was snooping around.

It leaves an awful aftertaste.

Though, they wanted it to be just like alcoholic Gin.

Oops, they were going to be disappointed. But then Gordon’s seem to have pulled it off.

If you like something like Gordon’s 0.0, you will probably go back to Asda’s unless you have a strict budget.

But give it a chance, please. It is OK. It is just not Gin.

So if you are Looking for non-alcoholic alternatives, then you might decide to give this one a try even though you may not be a gin drinker.

For the lower price, I love it as a cheap alternative.

It hits the spot and makes me feel very mellow, so much, so I had to check the bottle to be sure it’s alcohol-free!

Will you try the other alcohol-free drink opportunities out there?

But if you have tried other alcohol-free gin brands, you might think to save your money and buy something else!

There is a slightly chemical feel to it which I can’t put my finger on.

Asda does not have a great range of alcohol-free drinks, so that you might end up with this as the default option.

The flavour is pleasant even when mixed with a quality tonic, ice and lemon slices. I recommend Fever-Tree.

The smell is not like other alcohol-free gin options, and it ain’t no Seedlip!

Other options include a ginger ale mixer or lemonade.

Does Asda sell much alcohol-free?

Not in local Asda, but beer has improved from zero to several in the last few years.

The wine is minimal, and not all of it is alcohol-free but low in Alcohol.

But to be fair, they are making an effort, and they have two budget but great alcohol-free sparkling wines in Non-Secco and Belle & Co.

Both excellent and Asda. I love you for that!

It is very much in line with other big supermarket stores in the UK. However, I expect things to change.

The rate of change is slow at best. At the till most places ask you if you have made a mistake!

But of course, you and I have a vested interest, right? Just know where to find it.

The alcohol-free wine is hidden on the bottom shelf.

After all, we are a bit weird, right? So best keep us out the way.

The trend has been happening for a while now.

But there is slowly, but indeed a wake up calls coming.

The number of people reporting alcohol-related problems in Britain is the highest in 20 years.

“The numbers have been going up,” says Dr Maureen Talbot, chief medical adviser to the Portman Group, a charity that advises on responsible drinking. “It’s as if we’ve woken up and realised alcohol has consequences.”

“Alcohol is hurting a lot of people,” says Dr Talbot. “It’s harming their health, their finances, their relationships with their partners and families, and, of course, it’s killing people.”

Alcoholics account for one in six hospital admissions, 1.5 million hospital visits, and 200,000 doctor’s appointments every year.

But I just hate that label!

The misuse of Alcohol now causes some 8,000 deaths.

“Alcohol misuse is having a devastating impact on society,” says Dr Talbot. “Their quality of life is worse, their health is worse, and their finances are worse.

Unfortunately, things are now getting worse, and my story in Stop Drinking Alcohol Now is the story of how you can be a social alcohol wine drinker, and it can still have a massive impact on your health.

Luckily there are now more alcohol-free options even in the Gin world like Tanqueray.

But for me, I was just a wine drinker, but non-alcohol-free Gin is an excellent option for variety.

I think my brand of anything gets a hard time.

Alcohol-free gins can be hard to find, and the best of them are usually only found in specialist liquor stores in the states.

In some countries, you would never find them.

ASDA’s version isn’t as good as the top-shelf alcohol-free gin brands, but it will do if you don’t mind paying a little less.

And who doesn’t if the taste is OK.

High alcohol-free gins, like some of the super-premium brands, can be a bit harsh to drink.

On the other hand, the Asda alcohol-free gin has a smoother taste and a slightly lower alcohol content.

A significant problem with alcohol-free Gin is taste in some brands,

The flavour of an alcohol-free gin is usually not as strong as a regular gin; as a result, the taste can be off-putting for people who don’t drink Gin.

And of course, many people who drink alcohol-free alternatives want Alcohol.

But alcohol-free Gin or spirit is making its mark.

So, in summary, Asda Gin, please back off and give it a chance.

ASDA’s Gin is slightly more pungent in taste than other alcohol-free gins, so it’s more drinkable with a suitable mixer.

And the lemon and limes.

But the downside is it is less gin-like.

It also has an attractive floral and herbal aroma, making it the best alcohol-free Gin for people who don’t like the taste of Gin.

Maybe maybe not you will decide.

ASDA’s alcohol-free Gin is a good compromise between strength and flavour.

It’s not as strong or as bitter as some super-premium brands, and it has a milder taste.

Another point in its favour is that ASDA’s Gin isn’t too thick, unlike some super-premium brands.

Of course, many people would argue that it is just watery then!

But yes, Asda does sell alcohol-free Gin! And good for them. I applaud it.