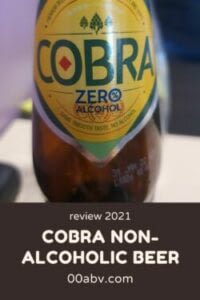 What is Cobra non-alcoholic beer?

Cobra Zero is the non-alcoholic (0%) version of the brewery’s widely known brew.

It might additionally be referred to as Cobra Alcohol-Free Beer or Cobra 0.0

If you like alcohol-free, the good news for you is that this is a zero beer.

However, there might be a trace of alcohol if you read through the line, albeit a small one.

So many beers are 0.5 per cent which I avoid.

I do accept even though alcohol-free labelling is perfect and transparent, it’s still a minefield to understand overall.

I am still learning, and I am sure you are as well. And that’s fine as, in terms of choice, we want to support the alcohol-free drinks industry.

Could you be a fan of Cobra Zero?

Now I a massive fan, but why? Well, there is nothing like a beer and a curry on a Friday night.

After going alcohol-free, it was one of the things I did think I would miss but actually, this choice fits well with the chilli’s, nan bread and popadums.

Plus the chutney tray. Of course!

Several aspects of Indian food in the UK that I’ve just recently learnt:

Many “Indian” dining establishments are Bangladeshi, which I and a few others did not know.

But over the years, I have been educated by many of my local Indian restaurants.

The owners who I now know love to chat, and I get to learn the culture.

If you have a regular establishment, I am sure you do the same. But could you be a fan?

Would you see Cobra Beer in an Indian Home?

You would according to with my chat and research.

But here is the shocker.

Cobra beer may be a typical sight in many curry homes, but and wait for it, the beer isn’t an Indian (or Bangladeshi) beer.

Although to be fair, it did initially start there.

This beer business was set up in London by Indian creators and made to an Indian recipe, originally in India before production moved to the UK in the late 90s.

So I guess it is Indian after all!

But this does make sense.

Why Cobra brand so visible?

So is this why it’s such a common sight in several UK Indian and relatively are Bangladeshi go dining establishments?

Co-founder Karan Bilimoria first had Cobra beer because he wanted a beer that combined well with Indian meals.

This was the late 1980s, where the only option on the bar was fizzy beer or hefty ale.

Marketed as a smoother, different well-balanced beer to consume with spicy food, Cobra soon discovered its means onto the rear of dining establishment menus throughout the UK.

Has it gone across Europe?

And the rest as it’s now sold throughout the globe. I have even heard of friends of mine drinking it in Thailand and the States.

When was Cobra Non-Alcoholic Beer released?

Cobra released its non-alcoholic beer as far back as 2005. And it unique when you think about it as you think of the history of alcohol-free beer very differently.

Maybe it’s a cultural benefit; I am not sure.

After all, alcohol-free beer does not have the best reputation, especially amongst alcohol drinker, as the early option were so bad!

They called it Cobra Zero. And the branding is evident.

It’s bizarre, but I see it in some supermarkets in the UK, and big stores here are not known for their choice of alcohol-free beers.

It is hard to believe it been in existence for so long, but then you may be like me and only just decided to give up alcohol or just had to for health reasons.

The way they make it is a bit confusing, if I am honest.

Unlike the refined version of its flagship ale, Cobra Zero doesn’t include components such as maize and rice.

Along with water, its active ingredients are malted barley and yeast. 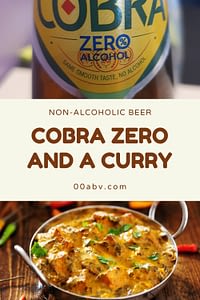 The advertised alcohol content of Cobra Zero is 0% ABV, which suggests it’s under the noticeable limitation of 0.03%.

This means it might have a trace of alcohol.

However, this is true of many foods that have much more, like bread rolls, orange juice, and your banana.

Read how much alcohol in my banana!

The reduced to no alcohol material and the components recommend the alcohol is eliminated after fermentation.

How does Cobra non-alcoholic beer score on calories?

I have seen better, to be honest, but I forgive it because I think it tastes excellent.

The way is produce and manufactured has created a medium to high amount of calories for a non-alcoholic beer– 78 calories per 330ml bottle.

I know much alcohol-free beer has to champion themselves as low calories such as bud zero.

Bear in mind there are very few alcohol-free beers that are diet drinks. So I think the two don’t go together.

But you are saving the calories you would get with the alcohol and the extra health benefits it brings to you.

The carb and sugar material is also rather high– there are 18g of carbs and 11.5 g of sugar in a 330ml bottle.

Fair enough as you are out having a curry, to be honest!

How Does Cobra Zero taste?

Amber in colour with a small head of foam, Cobra Non-Alcoholic beer no looks the part when poured into a glass.

I prefer drinking alcohol-free out of the bottle as I know what I am getting.

A few friends say the smell of it is a bit off-putting, such as vegetables being cooked, but I have never found that personally.

I would happily drink this beer without a curry, to be fair!

There’s an excellent little bit of fizz, and the mouthfeel is smooth.

It has a medium body, aided by a syrupy appearance.

The flavour isn’t as weird as the some find the fragrance.

I would say it sweeter than some alcohol-free beers, but there is no bitterness for me personally.

I certainly value its taste and the choice it brings.

I get a sense of lemon and corn flavours, but that suits me fine.

You can purchase via my affiliate link below.

As an amazon associate, I earn from qualifying purchases, but this does not affect what you pay. I do my best to make that clear at all times and follow FTC guidelines.

I certainly value its taste and the choice it brings. However, I would love to get your view of Cobra non-alcoholic beer. Leave your comments below.