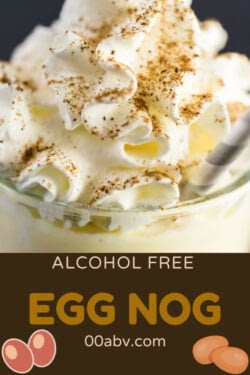 Now before you go “it’s not Christmas” I really don’t care. Alcohol Free EggNog is an option.

And us alcohol free drinkers welcome options with open arms.

When was the last time your walked into a bar and there was an alcoholic free drinks’ menu on the table.

In fact even a dessert can come with their fair share of alcohol.

So we can’t always say eggnog is alcohol free as people will put all sorts of stuff in it.

And no it’s not just drank at Christmas and Winter but all year around.

But I expect it has the connection of a winter warmer.

But then I live in the UK so go figure that one out weather wise!

Yes very often alcohol is involved but let’s dig deeper and find out what eggnog is and if it can be alcohol free.

To the last point the answer is yes it can!

What is Eggnog made of?

Despite what you might read from recipes EggNog is not that complicated but if you asked me I probably would not know how to make it.

I was staying in New York once in Winter and it was offered straight away as the snow blew outside.

It felt very homely in a big city.

In the UK not so much, I think it’s classed as a guilty pleasure. Regardless it’s a drink officially. 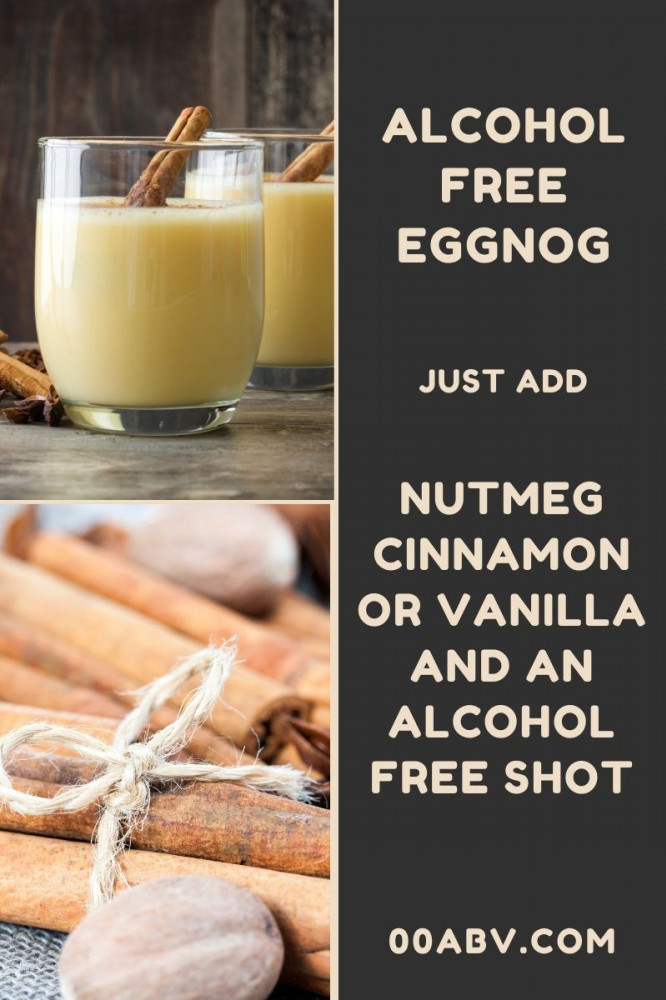 Really it’s probably a dessert but I can’t say that !

EggNog is made with eggs, milk cream sugar and things like nutmeg, cinnamon or vanilla is also added to it and it stands out as a drink even though it could pass as a pudding !

And wow those flavors really cut through!

And it’s definitely a favorite in certain territories. Mainly in the United States and Canada and yes it’s very much a holiday season drink.

However just like champagne and ginger beer eggnog is now starting to creep into everyday life day in and day out.

Remember there was no coffee shop at one point!

Now it seems like the is one on every corner and some serve eggnog.

Why is Eggnog Associated with Alcohol?

Mainly because it was a standard practice and alcohol was added into it – mainly rum.

But I have even known whiskey to be added. Or a Brandy.

So I guess it ventures into Coffee or Irish liquor.

Its a winter warmer.

The thing is if you are alcohol free very often alcohol or spirit is just added without question so it is definitely buyer beware.

Does Eggnog have a history?

It certainly does and like any drink of alcohol or otherwise it often goes back further than we think.

A quick search online and you can see it goes back to the 1800s when it was a part of any winter style celebration.

Even in the snowy mountains of Canada it was often seen in the bars and restaurant after a day on the slopes.

Overtime and probably about a century later yes there were the eggs, cream sugar, eggs but rum or even brandy might have been added.

In fact some traditional eggnog around was quite high it ABV so alcohol by volume which tells us how much alcohol is in a drink.

At the end of the day you were adding spirits in the mix which gave it the warmer feeling when you drank it.

My friends in the states actually call it egg flip and it was also called a posset.

This is some kind of milk and ale mix which was news to me and eventually eggs were added and so the first creations of an eggnog was created.

But at this stage cream was not part of the mix.

Can EggNog Be Healthy and Alcohol Free?

Sort of and yes is the answer to those questions in that order!

I say this because it comes with a diary which I know can be quite fattening and also many people have an intolerance to it. 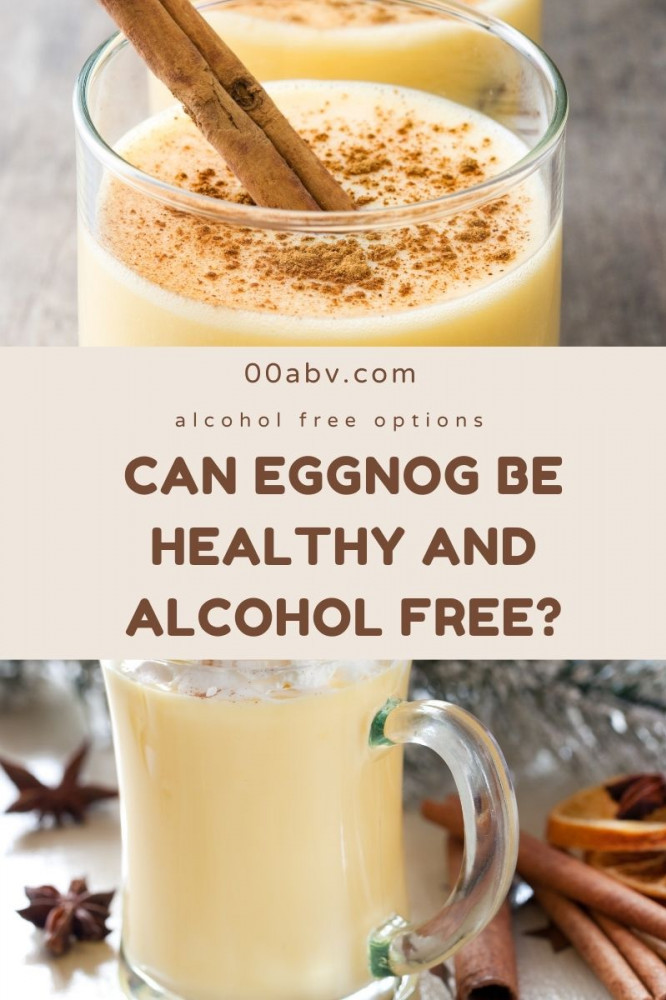 But milk can have much lower fat content now compared to what I remember growing up with just full fat with the cream floating on top!

Yes, bear in mind cream can be added and at the end of the day eggnog is a treat. And not going to be your “go to drink” day after day.

Although I know many people who went for a full fat latte when they were all the rage and soon realized the calories were piling on!

You can buy eggnog with lower fat and of course if you make your own you are in charge.

But some of the ingredients that should not be too unhealthy apart from cream are vanilla nutmeg or cinnamon which are often sprinkled on top.

Of course the whipped cream could be low fat or skimmed and any chocolate you shove on will need to be taken into account calories wise.

I never said this was a diet drink before you say anything!

Yes it could be an alternative to a desert and remember if you are going alcohol free you will be losing some of the calories.

So hey plenty to play for here!

Is Eggnog safe to drink?

Thanks to my ever watchful friend Ian for pointing out eggnog to me. He is helpful like that!

I trust he would not hurt me in any way. 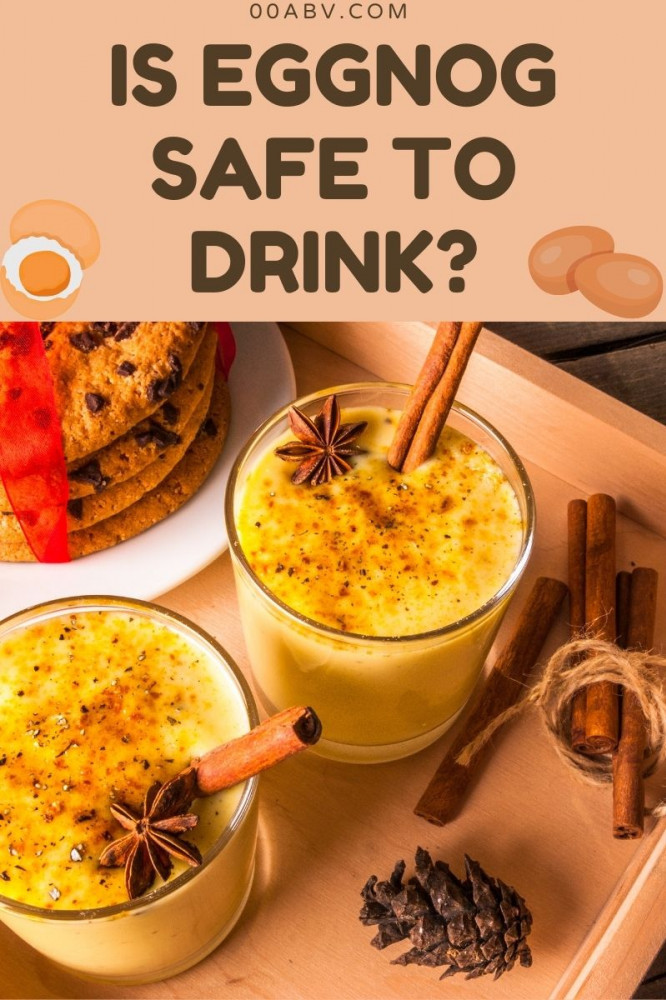 But eggs do have a reputation especially raw eggs which eggnog was known for and still is to be fair!

In the UK years ago when a government minister mentioned salmonella it caused havoc and almost killed the egg industry.

And yes you do have to be careful which is why it’s more common now to have your eggnog heated up and I totally prefer it that way anyway.

However, it is a bit like heating your custard for too long it can become really thick so it is a careful balance.

However, the good news if you are buying one out and about. No bar or restaurant is going to give you raw egg as it just will go against their food hygiene procedures so it may be something you don’t need to worry about.

The one I had in New York was literally steaming. They are also generally pasteurized with the usual E numbers and artificial what nots!

Can I buy an Eggnog Mix

You certainly can and for me it’s the easiest way you get an eggnog that you know is safe at home with no alcohol.

But you could add a lovely non alcoholic coffee liqueur to it which I talk about here.

It really does make a great drink.

I have included a link below for ease.

As an amazon associate I earn from qualifying purchases but this does not affect what you pay. I do my best to make that clear at all times and follow FTC guidelines

Now we were talking about safety and just to show you how times have changed here are the list of ingredients.

On the upside no alcohol but I would add in a shot of alcohol free liquor to spice it up like RUM for example.

It just gives it a kick.

It does a really good job for what it is and you could add a shot of espresso to really make it come alive.

Don’t be put off by the packing as otherwise it is the real deal and of course you can control if you want alcohol or not.

The quality ingredients are genuine and also if you are worried about the fat aspect it comes as skimmed milk.

And yes it’s got cream and egg yolks otherwise what is the point!

You also don’t need to worry about putting in a cool place like your fridge hopefully until is opened which is great,

If you are waiting for Starbucks and other UK coffee houses to start selling them for three weeks of the year this is a great opportunity.

Of course, it’s not the total real deal.

And some people might miss the whole point of an alcohol shot but that is the territory that comes with alcohol free drinks.

It’s got a good flavor even if the texture of the drink is on the thick side.

The price can be a bit of an eye-opener but it’s because it’s imported and the real deal as far as you can, it comes with the extra pennies.

You might get hooked up having it all year around.

Well at least until you visit New York again!

Would you try an alcohol free eggnog? Leave your comment below and I also get back to you.